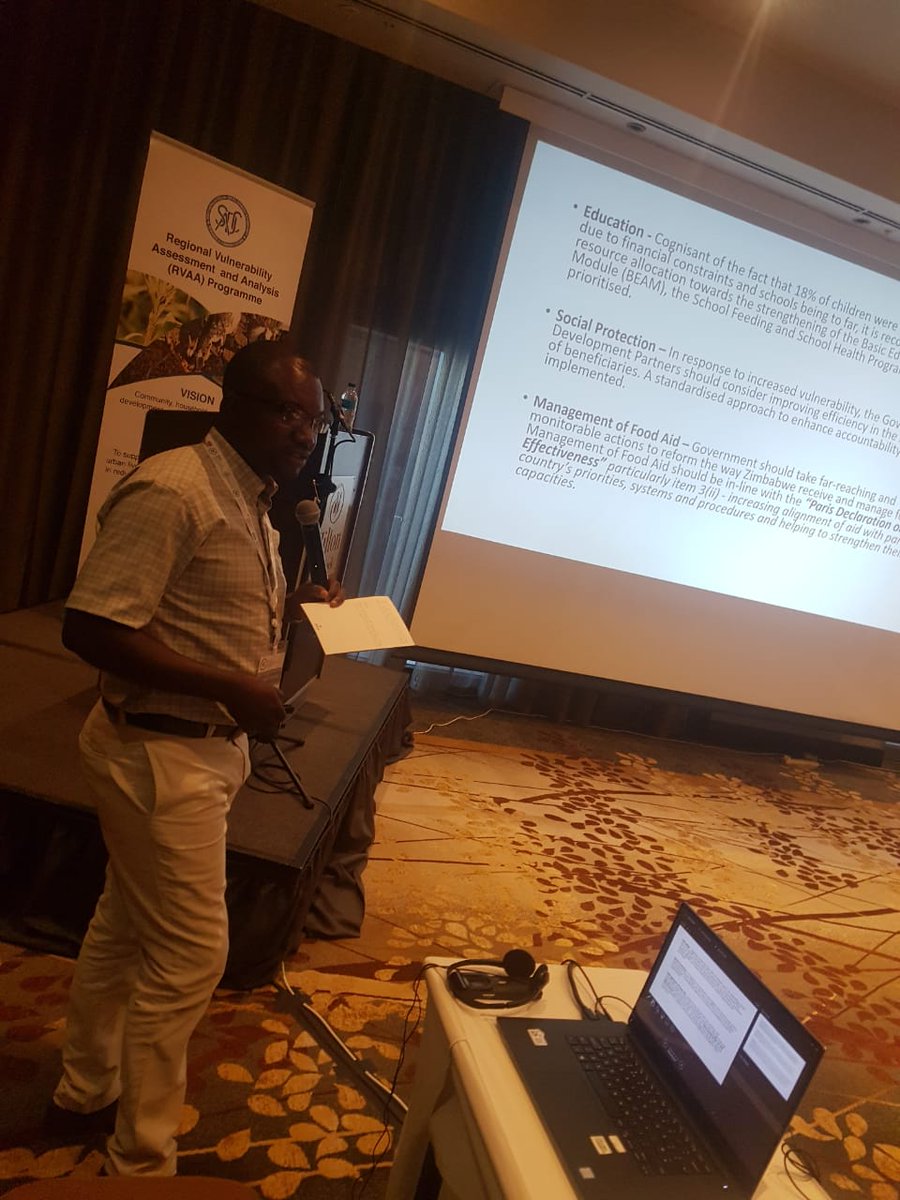 Across a number of counties in Southern Africa, vulnerability assessment and analysis results for the 2018/19 agricultural season paint a gloomy picture but with relevant interventions there is light at the end of the tunnel. This write-up will focus on Zimbabwe.

Addressing stakeholders during the Windhoek Regional Vulnerability Assessment and Analysis (RVAA) Dissemination Meeting for 2019, George Kembo, the Director of the Food and Nutrition Council (FNC) said Zimbabwe’s 2018/2019 said on the education front, about 18% of children of school-going ages were not in school.

“In some instances, children were considered too young to be in school by parents or guardians; and most of the schools were far for children to walk to. The first cause for children failing to be in school raises questions on the implementation of the Government Policy for Universal Primary Education and its complementary policy which states that no child should be denied access to schooling for failure to pay school fees. Sustainable ways of funding scaling-up of the Basic Education Assistance Module (BEAM) programme should be considered,” Kembo said.

Kembo noted that in response to increased vulnerability in the past two consumption years, Government and its Development Partners expanded their coverage of assistance beneficiaries and the flow of remittances also went up. Overall the proportion of households that received food transfers increased, while that of households that received cash, crop and livestock inputs and water and sanitation inputs decreased during the 2018/19 consumption year compared to the previous one.

He said with even increased vulnerability in the 2019/20 Consumption Year, demand on relatives to assist their rural folks is expected to increase. However, he warned that the ability of the remittances to respond is uncertain given the depressed domestic economy as well as the depreciation of the Bond Note (RTGs) against the United States of America Dollar; the currency of choice for the general Zimbabwean public.

From statistics provided, with the exception of maize, sorghum and cotton, the proportion of households that grew the major food and cash crops in 2019 decreased significantly compared to those that did in 2018. However, the poorer rainfall season experienced in the 2018/19 agricultural season resulted in reduced household crop harvests in all districts and rural provinces.

It was revealed that inadequate agriculture inputs (due to high prices), household agricultural labour, limited ability to hire and commandeer additional labour from friends, relatives and neighbours coupled with a rather high dependence on retained and unimproved seed varieties for most food crops, other than maize, continue to constrain households’ crop productivity.

The El Nino phenomena that ravaged Zimbabwe and many other SADC countries highlighted, once more, the importance and urgency of efforts to build resilience against climate variability and climate change amongst the rural populations of Zimbabwe. These efforts could include stepping up the promotion of climate-smart agriculture, water harvesting and irrigation development, particularly in the most drought-prone areas.

The consecutive poor rainfall seasons marginally reduced the proportion of households that own cattle and those that own goats. It was reported that about 62% of the rural households do not own cattle and a similar proportion (56%) do not own goats. Kembo said that this does not only indicate low levels of strained financial household assets but also lack of productive assets with enormous capacity for providing household nutrition and overall resilience, particularly in the drier parts of the country.

“This observation indicates that stabilising and growing agricultural income would be key to increasing the resilience of rural livelihoods. The 2019 Annual Rural Livelihoods Assessment results show that the share of rural households’ expenditure taken by food is around 68% thereby potentially increasing poverty or vulnerability.

“The proportion of households accessing loans remains low (4%) and these were predominantly given by family and friends to family members and friends; they remain largely informal. Financial inclusion in the formal institutions such as Banks, SACCOs and microfinance institutions remains largely constrained. This may be stemming from the fact that most of these households are borrowing for consumption hence presenting a credit risk to the formal financial institutions.”

On consumption patterns, there was a notable decline in the proportion of households consuming acceptable diets (from 55% in 2018 to 47% in 2019) and an increase in households having poor food consumption (from 20% in 2018 to 24% in 2019), which shows deterioration in household food security compared to the same time last year.

The Minimum Dietary Diversity for women and Minimum Acceptable Diet for children were reported to be low. Furthermore, consumption of iron rich foods and vitamin A rich foods by households was low, which further exposes the women and children to poor health and nutrition outcomes. Community based interventions to improve child and maternal dietary intake particularly to improve the nutrition outcomes should be scaled up if targets to reduce stunting and other forms of malnutrition are to be achieved – recommended, Kembo or the Report

Water Sanitation and Hygiene (WASH) practices continue to be of concern across all provinces. Despite 28% of the rural households’ dependent on untreated water sources for their domestic water supply, worsening is that 26% of the households do not treat their water before use. Furthermore, open defection continues to be a common practice for about 33% of rural households. Matebeleland North is the worse-off province for all WASH indicators. In-depth research is required to understand the causal factors of the relatively high prevalence of open defecation across the country, particularly in Matebeleland North province.

This situation renders a significant proportion of the households vulnerable to water borne diseases such as diarrhoea and typhoid. Efforts to improve the water and sanitation situation in all rural provinces appear to have been negligible over the past five years and need urgent attention.

On child nutrition, it was noted that malnutrition is a major impediment to economic growth and development. It contributes to poverty by increasing mortality, increasing susceptibility to disease, impairing cognitive development and educational achievement and reducing work capacity and productivity in adulthood.

Focusing on hazards and shocks, it was noted that communities are faced with a host of shocks and hazards both natural and anthropogenic impacting negatively on their ability to access their food and non-food requirements. Cash shortages (81.%), cereal price changes (78.8%), drought (75.9%) and crop pests (44.3%) were reported as shocks, which affected households between April 2018 and March 2019.

Generally the hazards experienced had the greatest impact on households’ food access, assets loss and cash incomes for most households. Yet a majority of the rural population lacks capacities to cope and recover from the compounded impact of the different types of hazards they experience.

In light of the above results, a number of recommendations were proffered as follows: