Jeff and MacKenzie Bezos are divorcing after 25 years of marriage.

While the Amazon founder’s name is well-known, the news has left some people wondering, who is MacKenzie Bezos?

Who is the wife of the richest man in the world, someone who has led a relatively private life as the partner of the powerful founder and executive?

MacKenzie Bezos was also instrumental in the founding of Amazon in 1994, a year after marrying Jeff in 1993.

She was Amazon’s first accountant and was involved in its transformation from a small online bookseller to the e-commerce behemoth it is today, the second company in American history to be valued at over a trillion dollars.

MacKenzie and Jeff were married six months after they first met at Wall Street hedge fund firm D.E. Shaw, where Jeff was a vice president and interviewed MacKenzie. Together, they have four children.

But she is perhaps best known as the author of several novels, including Trapsand her debut, The Testing of Luther Albright, which won an American Book Award.

She studied at Princeton University and served as a research assistant to famed author Toni Morrison, who called Bezos “one of the best students I’ve ever had in my creative-writing classes” in a 2013 Vogue profile. And in 2014, she founded an anti-bullying organization, Bystander Revolution.

In 2018, the Bezoses also jointly committed $2 billion of their combined fortune to create the Day One Fund, which will fund a network of preschools in low-income communities as well as support existing nonprofits that assist homeless families.

MacKenzie may also soon be one of the world’s richest women. Jeff Bezos is worth roughly $139 billion, and under communal property laws in Washington State, that could mean each individual Bezos could walk away from the marriage with around $69.5 billion.

That would make MacKenzie roughly 26 times richer than Oprah Winfrey and 100 times richer than the Queen of England, according to Marketwatch. She would also end up with some serious real estate holdings, as the Bezoses reportedly own at least five homes around the country.

Jeff Bezos announced the couple’s plan to divorce in a tweet posted Wednesday. MacKenzie Bezos has yet to release her own statement. 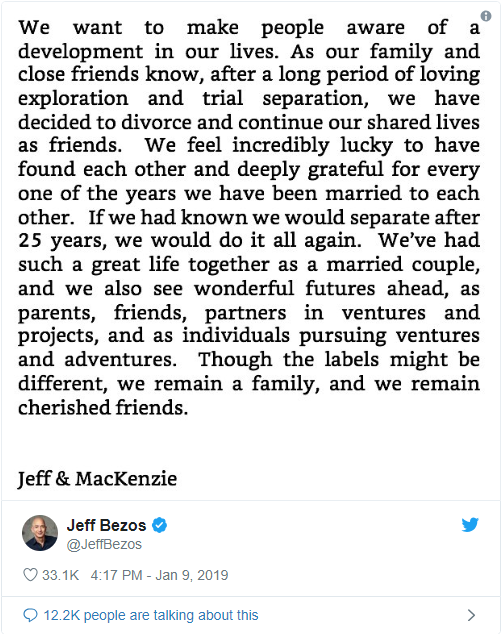